Although I’ve always lived in relatively flat places in the Mid-Atlantic region, something about the western mountains just feels like home. On long road trips, the first glimpse of the mountains after days of travel across flat plains sparked gasps of delight. My family spent many happy hours hiking in the Rockies, tossing pebbles into rushing streams, and spotting wildflowers, birds, and mountain animals such as elk, marmots, and bighorn sheep.

This summer, our first glimpse of the mountains after a long westward drive came near Taos, New Mexico. I pulled the car over and paused a few minutes to absorb it, stepping out to smell the sweet scent of Ponderosa pine. “Nothing like it, is there?” noted a fellow driver who had stopped for the same purpose. Nothing indeed.

Taos seems just a bit enchanted. The area attracts artists, independent thinkers, and lovers of the outdoors. Earthships, an off-the-grid settlement, occupies acres of land on the Taos Mesa. Its name hints at the otherworldly feeling of peering at pods tucked into the desert like a settlement on some faraway planet. A few miles away from Earthships, we stayed overnight on the mesa in a funky domed house, gazing at the stars and dreaming of those other worlds.

The next morning, more up-and-down miles brought us to Moab, Utah, where dramatic land formations characterize Arches National Park. Years ago, I’d read Edward Abbey’s Desert Solitaire, which details his time as a park ranger at Arches. I’d worried about the human destruction of Arches after reading the book, but for now, the park seems to be managing its visitors wisely. In our experience, park guests seemed to respect the trails, content to marvel at the gravity-defying sandstone arches without feeling the need to desecrate them. 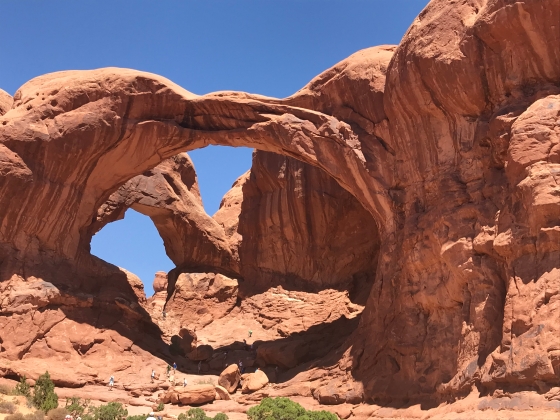 At last, after nine days of driving from Maryland, we reached our destination, Salt Lake City, our home base for the summer. Cool summer nights perfect for runs and bike rides in Liberty Park, friendly local people, inviting coffeeshops and restaurants, and the ever-present Wasatch Mountains just a short distance away: all of these are enough to make a place feel just like home.

At home in Utah